Day 15 of advent! A well known social media site just told me that two years ago I was snoozing on the sofa by the Christmas tree and an open fire. Won’t pretend that I wouldn’t love a snooze on a sofa sometime soon but we are having an amazing time exploring Rome. This category had a clear winner, still the best day of cycling of the trip, partly because in the cold weather preceding it seems so unlikely we would be able to complete the ride. Would thoroughly recommend this ride – when it’s not snowy you can even do the very top section on a cycle route. Loved the Gotthard Pass! Well done Switzerland, thanks for clearing the snow for us!

Spurred on by temperatures of 20 degrees plus in Northern Italy it was time to head directly south through Switzerland, a country we have cycled across before so had not planned to include this time. But it is a beautiful country, and well set up for the cyclist (even if they do take you up and over hills instead of on flat roads around them) so we were not too upset at this change. Other than the fact we had left our comprehensive Switzerland cycling guide, map and plug adapter at home. Lucky the routes are well signed.

The first day in Switzerland was spent riding through the north of the country towards Zug, supposedly the most expensive city in one of the most expensive countries in the world. Our favourite thing about it was the obsession with pumpkins – we have seen a lot in the run up to Halloween but Zug took this to another level. From Zug we rode south mostly along lake shores, though the fog meant that they were a dull grey and the snowy mountains we knew lay ahead were obscured from view. Probably for the best. We made it as far as Wassen at 900m above sea level, negotiated a deal for a hotel room and fuelled up ready to climb to 2100m the following day. (For context, the highest mountain in the UK, Ben Nevis, is around 1300m high). 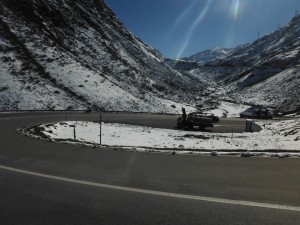 We woke to a beautifully clear but frosty morning, finally able to view the mountains that lay in our path and the amount of snow up there. A 4km section of the road is being upgraded and we had been told that there is a bus service to take cyclists through the roadworks. After seeing no bus and no ‘road closed to cyclists’ signs we set off through the first tunnel with temporary traffic lights. The workmen laughed and encouraged us to keep going – must be fine we thought. However at the second tunnel we were faced with a Swiss man controlling the traffic rather than lights, who (we think) explained that we can’t cycle on and we should be on a bus. After arguing that there was no bus and no sign (in English obviously) we were finally waved on, and had to pedal madly uphill to try and get out of the tunnel before the traffic coming down was let through. With only gummie bears to fuel us this was difficult and after holding up a large truck we finally made it out.

Eventually we reached Andermatt at 1400m, and asked in the tourist office about the weather at the top and if it was wise to cycle over. ‘Snow, -2 degrees, are you crazy?’ was the gist of the answer. The road closes at 6pm because of the ice, our biggest worry was slipping on the way down. But it was so clear, there was no risk of snowfall, and we really wanted to ride over if possible so we continued uphill with the plan that if it started getting icy we would turn back and get a train. And we were so pleased we did. The road up was not too steep, the views were incredible with the blue sky and there was hardly any traffic. Cars that did pass beeped and waved. Apparently in the summer the road is full of motorcyclists whizzing past – not at this time of year. We saw no other cyclists either. The
road flattens out towards the summit and before we knew it we had made it!

The snow was thigh deep at the side of the road and it was freezing cold, after a few celebratory pictures we put on several extra layers and set off on the descent, usually the reward for a tough climb but for us we had been dreading this due to the frost on the road. By the time we dropped to Airolo at 1100m through some steep switchbacks our hands and arms were more sore from being on the brakes than our legs were from the ride up. Again not wanting to camp we got a hotel room, extending our Swiss Alpine Holiday for one more night, and found we had a panoramic view of the Alps from the bedroom. Awesome! Looking up at the snow, where the road came from and how it twisted and turned we could not believe we had just cycled over the pass. All that was left was to have a celebratory dinner of pasta and tomato sauce (there are limits to our ‘holiday’) and collapse into bed very pleased with ourselves.

Thanks to Ralf and Franzie and the staff at Hotel Gerig (Wassen) and Hotel Motto (Airolo) for making our Swiss Alpine Holiday just about affordable!