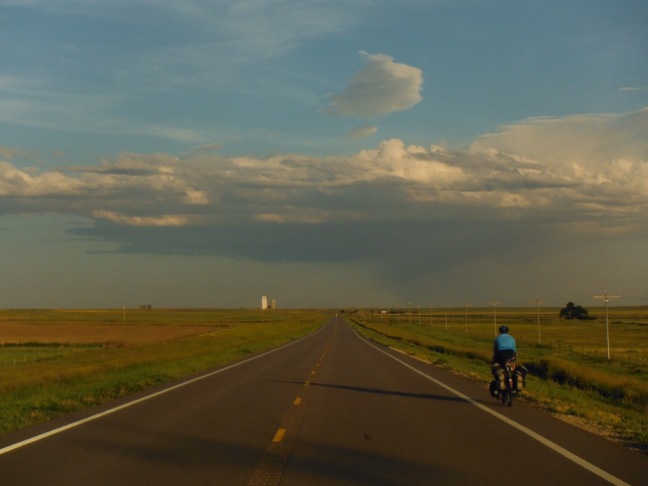 Kansas. The state everyone wanted to tell us about when we talked about our ride West. Boring. Cornfields. Flat. Windy. Empty. Mind-numbing. None of which filled us with excitement. But could it really be that bad? It would be almost 500 miles from East to West. We hoped not. Writing this in retrospect, reading this blog post may be similar to riding across Kansas. Starts off well, creating some optimism, but soon fizzles out. Once finished you are filled with the satisfaction of sticking it out until the end. Then you might look back fondly and hope in time you remember the good bits, but you know you won’t be repeating it in a hurry.

A mile into day 1 we crossed the imaginary line that is the state border without even a welcome sign, and were pleasantly surprised that the land didn’t instantly flatten out, turn yellow with corn and the wind didn’t smash us in the face. So far so good Kansas. For the first few days the land rolled nicely, everything was green, we rode through the Flint Hills area and visited the Prarie Tallgrass Reserve (where we were disappointed to find only regular height grass, apparently it isn’t tall until the end of the summer). Towns were evenly spread and felt welcoming; we stayed in Council Grove and Hillsboro, both nice, small places full of friendly people. Council Grove had a load of historical sites to visit and Hillsboro, a college town, had a nice feel and lots going on (the first thing that happened to us in town was a guy shouted out of his car window that we should go to the farmers market for dinner, so we did, then as soon as we sat down a family came over to chat to us and bought us food). We were finding interesting tourist attractions. Though Kansas needs to work better at selling them.

So finally we had the long empty vistas that we had been expecting. The towns dwindled and became less interesting and more buildings became derelict. Farmland ruled. We saw more signs for churches than we did for towns. The wind picked up and it got hotter. We had been told that to beat this, it is best to get on the road before 6am. Reluctantly this became our routine, only for it to be roasting by 12 noon with us miles from our intended destination. We spent the evenings trying to get to sleep in a pool of sweat. But it was still not empty. Farm buildings were regular enough and close enough to the road that we were confident of finding shelter if storms came over. The scenery didn’t change much but there is a certain beauty in open space. And the early morning starts provided colour. Life on a bike was still good. 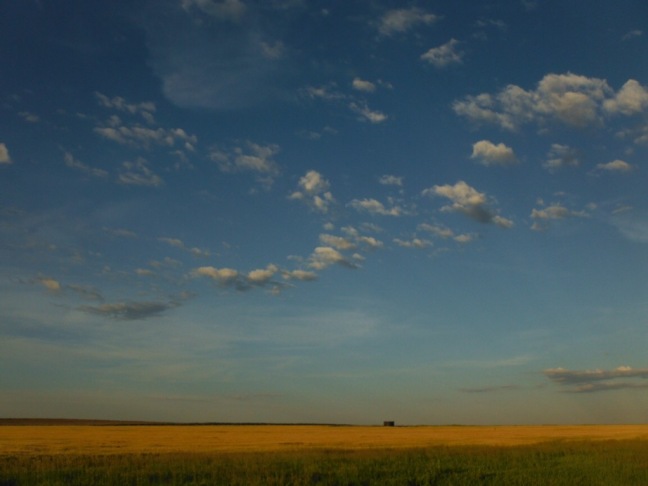 There’s no point giving a day by day breakdown of the 8 days we spent in Kansas. So here’s some interesting things that happened: (interesting is of course open to interpretation)

– We stayed in a motel for the first time. And the second time.

– After the wildlife extravaganza on the Katy Trail we were back to dodging dead animals in the shoulder, including armadillos. Still not seen a live one, but they are pretty big.

– People actually greet you by saying “howdy”. I enjoyed this.

– We stayed in a house that had been built by a guy especially for his wedding, with a great curved staircase in the centre of the room for her to walk down. They are now divorced. But the house is still cool.

– One day I realised our bike pump was missing half of it. Despite (or maybe because) of only having one puncture in the first 7000 miles of the trip I was convinced we would get one before we reached the next town big enough to have a pump (40 miles). We did not.

– Whilst camping in Lyons I got 25 mosquito bites on my back through my t-shirt. Why did nobody mention mosquitos when they talk about Kansas?

– I fell down some stairs in a house and my head broke my fall. How I did not hurt myself seriously I do not know. But I was grateful that I didn’t.


In the middle of all of this my younger sister got married back in England. I got up at 4.30am to Skype home before the ceremony and see her in her dress, feeling very far away. Wedding thoughts occupied my mind through the open scenery for the whole day, wondering what was happening back home at particular times, sad to be missing the day. The following morning I looked through the photos and was suddenly filled with overwhelming sadness at missing such an important day for my family. For the first couple of hours that day I couldn’t stop the tears from flowing. It’s easy to forget that by taking trips like this, we miss things back home – not always as important as a wedding but snippets of a life that is going on without us. This is tough sometimes.
But life on the bike went on. Kansas went on. One day I entertained us by reading from a “fun facts about farms and ranches” leaflet we had picked up (part of a Kansas scenic byways fun facts series). The road was so quiet I could ride and read. We learnt some interesting facts about cattle, and some less interesting facts about fence posts. This killed about 5 miles. Small towns were very proud of their school achievements, and we looked forward to reading about these which were always advertised on entering the town. The High School in Scott City had an illustrious history; we were particularly impressed by their 2010 achievement (to be repeated in 2013).

So how interesting is Kansas? It’s not going to win any awards for a variety of scenery, but there is a beauty in emptiness for sure. We liked it. But on the final day we rode towards the border with Colorado excited about a change of scenery – there would be mountains, lakes and gorges as soon as we crossed the border right?* 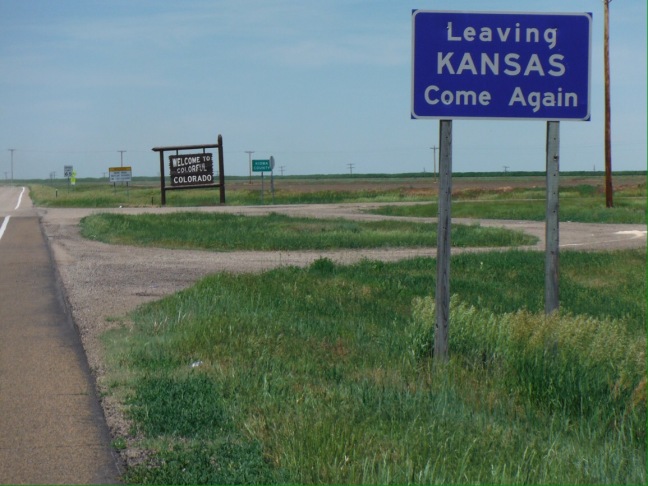 *Spoiler alert. This did not happen.

Thanks to: the staff at Knights Inn Ottawa for getting up with me at 4.30am to make sure I could Skype home; Paul and Sharon; Del, Debbie and Alison and the farmers market crew; the McPherson visitor centre staff; Sarah.