As we prepared to leave British shores the UK gave it’s all to show us what we were leaving behind. Thanks to so many of our friends, colleagues, students and family who made the effort to fit into our plans in those last few days. The weather was amazing, Leicestershire looked just lovely as we set off on the the first (short) ride from Measham to Hinckley on Sunday afternoon.

The next morning was equal to it, with beautiful clear blue skies, rolling green hills, delightfully English villages and plenty of picnic spots to enjoy snacks. Northampton itself was a less fun meander along random cycle routes (“weren’t we just over there a minute ago?!”) – it was fortunate that Sarah our extra team member for the day had prepared additional sandwiches to counteract the challenge.

It was great to see friends for a final goodbye in Stewartby and the 110km day put Kelvedon (Debs’ Aunt and Uncle) in touching distance for Tuesday.

Make sure there are stiff peaks…

Who knew Hertfordshire was so hilly? We didn’t, and it really was. It was also our second day of headwind, and the loaded bikes felt pretty heavy. Thanks to Trax Cycles of Buntingford, who helped swapped Debs’ pedals and made the bags just a little bit lighter. Herts and Essex both had some great cycle routes, including the Flitch trail, named for the Flitch Trials of Dunmow, where the winning couple are awarded a side (flitch) of bacon if they can prove they have not argued for a year and a day. It can be assumed that none of the winners have tried to follow the Flitch trail through Dunmow itself, which was not the relaxed rail trail present either side.

Sadly, every week, someone has to say goodbye… 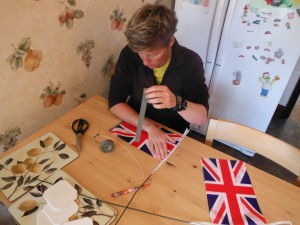 (Bake-off spoiler alert) This week it was Flora and us (not that we found that out until later, see Belgium). Our Kelvedon family helped us carb-load for future pedalling and we hit Harwich for the overnight ferry. If you haven’t been on one, this is great fun, as you can pretend to be in an Agatha Christie novel and you get to sleep in a little cabin. Even better, you wake up in a new place with the whole day ahead of you. Welkom!