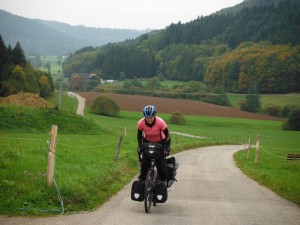 After a rest (eating, washing, reminding our legs how to walk, shopping for warmer coats, gloves and socks) day in Wissembourg we decided to stay longer in France, enjoying understanding a little more of what people were saying than over the border in Germany. So we turned our bikes south towards Strasbourg. Unfortunately the cold snap (or what some people call Autumn) that started with frost on the inside of the tent a couple of days previously continued, and we were in for a few days of daytime temperatures of 6-9 degrees. This was not what we were riding away from a British winter for. Food stops became shorter, unless they were inside in the warm where they became much longer.

The small French town of Uberach, our short outside lunch stop for the day, was notable for two reasons. Neither of which were the brewery where we planned to have a beer but were perhaps rightly turned away for wanting to eat our sandwiches inside at the same time. For the first time in two weeks riding on the continent we rode for a period of time on the left side of the road. Debs went first and I followed, not thinking anything of it, until about 20 meters later she stopped abruptly and started shouting sorry to an oncoming driver. The elderly lady seemed a little surprised but hopefully the British flags on the bikes explained a thing or two. Back on the right side of the road we stopped, put several layers of clothing on and ate our sandwiches in a small square outside the town hall. At some point a French guy came and chatted to us, in French, about our trip. Satisfied with the answers from two cold English girls he returned to work in the town hall, only to reappear with a colleague and a camera a short while later. Much hilarity ensued as he tried (and failed) to pick my bike up and then rode it around the small square almost toppling over. I hope we made the Uberach news.

We reached Strasbourg the following day, an impressive city centre encircled by water which we liked very much given our love of islands. From there we had the choice of riding down the Rhine south and then east – flat – or taking a ‘short cut’ across the Black Forest in Germany – hilly. Stubborn as we are, we chose the latter due to already having ridden a good section of the Rhine in 2012. And liking a challenge. However the challenge on a cold day with a long ride mostly steep uphill to our hosts was too much for us, and after the fog closed in and the rain made everything very unpleasant we gratefully accepted a lift the last 20km. Cold, wet and a bit miserable, we were warmed up by tea, chocolate, wine and a huge dinner. Conversations about our route and the tough weather, and the discovery that it was 25 degrees in Lake Como, led us to change plans slightly and head straight south through Switzerland – with a 2100m pass in the way – to northern Italy. Sunshine here we come?!

Thanks in this post to Claud and colleagues at the Uberach Mairie; Martine, Dominique and Stefan (great guitar playing); Tobi; Dirk and Karo.