So it turns out that New York State is pretty big – after whizzing through our first three states at a rate of one per day, we crossed the border into NY and saw that it was a long old way to the Canadian border. Luckily for cyclists wanting an easily navigable, traffic free route through the state, there is a 360 mile bike route along the old Erie Canal that takes you from Albany to Buffalo. Always interested in an easily navigable, traffic-free route we rode west from our camp spot in Bruce and Sandy’s garden to join the trail in Amsterdam and intended to pretty much follow it for the next 300 miles.

The Erie Canal was quite an engineering feat for the early 1800s, allowing boats to travel from New York City to the Great Lakes. Until the railways made boat travel look slow and cumbersome this was how goods and people travelled across the state. Now the canal system is used for a multi-use trail and although in some places the gravel makes riding frustrating – and there are short sections that are still unfinished – it’s a pleasant way to ride across the state. However the view doesn’t change much, and by the end of the first day we were starting to understand why people had told us they liked it but wouldn’t ride it again…
There is loads of historical information, though there’s a distinct ‘scraping the barrel’ feeling as you get towards the end and read the 8th information board about the intricate workings of lift bridges. Some of it is really good though, particularly the descriptions and photos of life ‘working the boats’. The canal would be drained over winter and the bottom would freeze and be used for ice skating; kids would be entertained by swings on boats but have rope tied round their waist and attached to the hull so they didn’t fall off; there was once a 100-boat pile up after the one at the front got stuck. As with the whole of our bicycle trip so far we were out of season along the canal so it was really quiet, we would see hardly anyone all day on the trail (but in typical North American style, those we did see would stop and speak to us and exclaim that we were awesome/brave/crazy for trying to cycle across the country and wish us luck). The riding was easy, it was flat as a pancake, but as is often the way with flat riding, it got a bit repetitive boring at times.
So after three days on the canal path, including spending a night in Rome, we decided to detour off and take a parallel route slightly south for a couple of days across the Finger Lakes region. This is unsurprisingly a particularly affluent area of the state – on reaching the first lake it was hard to believe only 15 miles previously we were riding through a particularly sketchy area of town where for the first time in the USA we were a little fearful of stopping at traffic lights. The lakes made for great lunch stops, the roads were quiet and the hills rolling enough to be interesting without tiring us out. We skirted the top of four different lakes that shone blue under sunny skies. This was the life.

Off the trail we were on roads again with cars (less fun) but more places to stop at (as we were to discover, much more fun). On seeing a sign that said ‘Chocolate Pizza’ and an arrow to the left, but no more information, we obviously pulled in to see what this was all about. Fearing some warm chocolate/cheese combo yet still wishing to see it with our own eyes we were pleased to find lots of chocolate, no cheese, and super friendly owners who fed us free samples and were excited about our trip. We made it onto their blog and their enthusiasm about our ride spurred us on to Geneva (spot the pattern?) for a night by the lake.
Late that afternoon we stopped in Seneca Falls, famous as the home of women’s rights in the USA. (We were fast learning, with much sadness, that having ‘Falls’ in a place name did not indicate waterfalls were to be found.) Seneca Falls is home to the Women’s Rights National Historic Park (yet it wasn’t a park, but a museum, it’s like they are trying to confuse us now) where I walked in to be greeted enthusiastically by a member of the parks staff with “right you got 19 minutes, whadda ya wanna see? I’d recommend going upstairs first to read the history and then to the chapel where the first convention was held, you cycling, awesome, we got ice water for your bottles and restrooms too” without pausing for breath (I guess she didn’t want to waste more than half a one of my precious 19 minutes). I did exactly as instructed and left with slightly more knowledge about the foundation of the women’s rights movement, full water bottles and an empty bladder. 19 minutes well spent. Debs sat outside on a Women’s Rights Park branded bench for 19 minutes. I think I won that day.

From Geneva it was back to the canal trail that would take us almost all the way to the Canadian border over the next three days. The canal is often higher than the land around it which is a bit weird, usually water is on the lowest ground. As if to illustrate how weird this is, at one point a road goes underneath it. Bike traffic on the trail picked up and we saw our first cycle tourist of the trip heading East and then to Europe, rode with a group of cyclists out on their first ride of the year for a morning and then saw our second cycle tourist, on a trike. Oh and we also had to share the trail with lots of geese who hissed wildly as we passed. But their babies were cute so we let them off.

Our last night on the canal was spent camping by the water. It’s still pretty cold at night so this required lots of pasta followed by lots of clothes but we survived and rewarded ourselves with our first American diner breakfast experience the next morning. But this is for another post…. 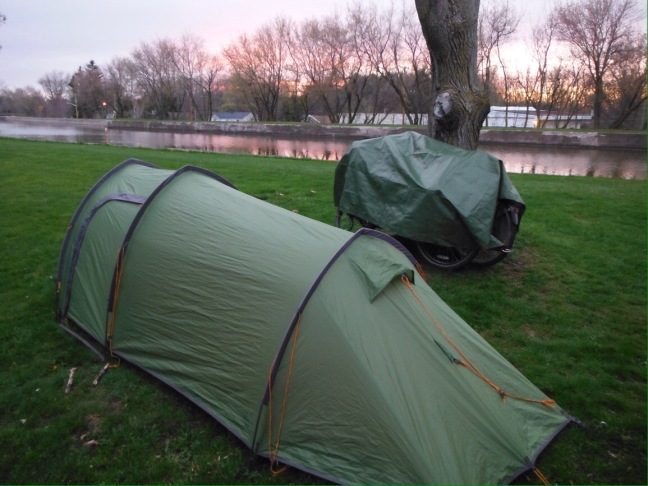 Thanks to Betsy, Pete and Chris for the impromptu hosting; Larry and Patty; Katherine and Greg for introducing big brother Surly; Ryan and the rest of the team at Chocolate Pizza; Jeff; and Karin and Ken.

One thought on “Erie go…. Cycling along the Erie Canal trail”