After weeks of endless sunshine and blue sky, our weather fortune finally changed in Oregon. It rained. A lot. When it wasn’t raining there was usually a heavy sea fog that blocked any chance of ocean views. We spent a week camping every night in state parks, and waking up to and packing up in the rain was slow, tiring and annoying. People had been telling us for ages that the Oregon coast was the best bit, with great scenery and camping, and the weather was making this the least enjoyable stretch for us. It reminded us of miserable days in England where it stays grey all day. This was Orengland. We weren’t finding the people as openly friendly either – there are so many cyclists on this route we are just two of many. The towns we rode through were mostly drab, unappealing strips of stores. Add to this an increasingly busy road full of large trucks towing even larger trailers and the cycling blues started to hit a bit. 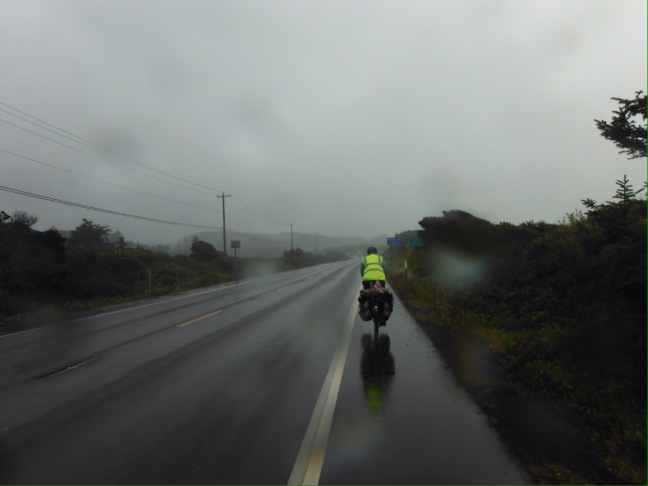 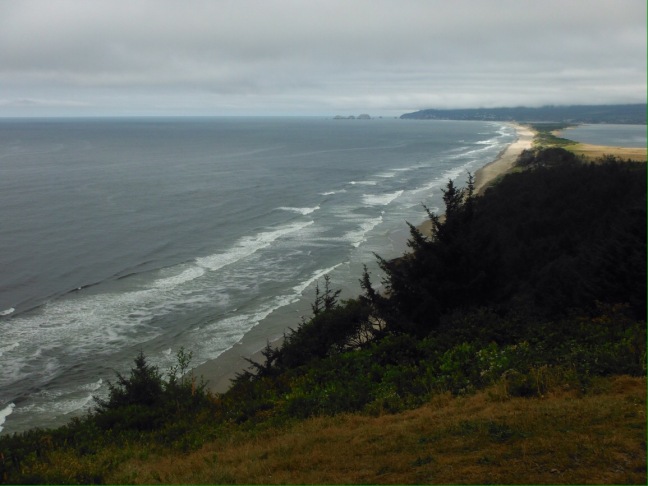 The Oregon coastline is over 350 miles long and quite unique in the USA in that most of it is state owned and therefore publicly accessible. The coastline is dotted with state parks, wide beaches, lighthouses and cliff walks. All state parks with camping have specific sites for hikers and bikers at a cheap rate. Again people had raved about how great these are – maybe (likely) the weather impacted our perspective but we weren’t that excited by them as mostly the hiker/biker site is a small and not particularly flat area stuck at the back of the campground furthest from the ocean, the showers and anything else you might need. One exception to this was Cape Lookout state park, where we could fall to sleep to the sound of the waves and walk from the back of our biker site to the sea in less than a minute. That evening we cooked dinner on the beach on a rare clear evening as the sun set and Oregon was starting to impress us. Unfortunately the next morning Orengland was back – the rain was heavy until lunchtime so we hid under a shelter and ate porridge until it slowed enough to pack away and hit the rainy road. 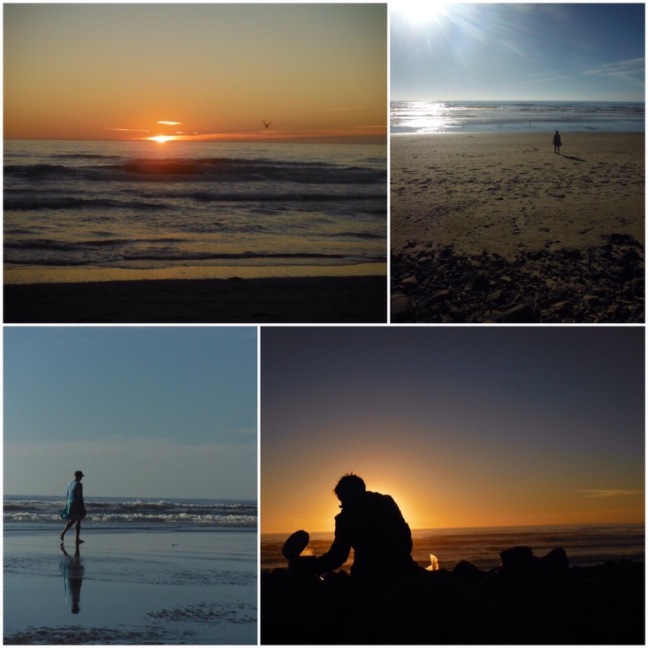 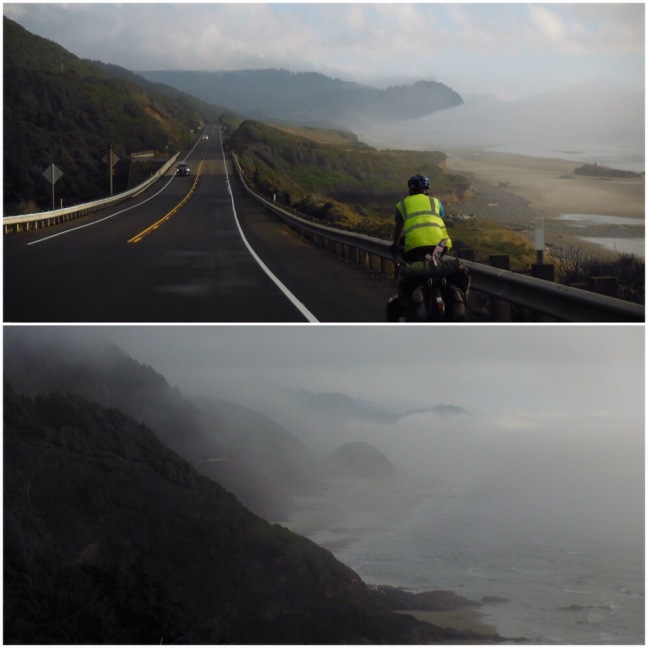 Some days the cloud would break mid- or late-afternoon and treat us to some blue skies, but even this just seemed to be a tease – “hey look how great Oregon looks in the sunshine! Bad luck that you don’t get to see it often! Ha!” At least we got to see bits of the famous coastline, and it is pretty nice indeed. Rocky bluffs, steep cliffs, big waves, and we even saw some grey whales splashing about off the coast. We also rode past the supposedly “world’s shortest river” and “world’s smallest harbour”. I say supposedly because there is a habit of assuming that if they are the smallest (or biggest, tallest, etc) in the USA then by default they must also be the smallest in the world… 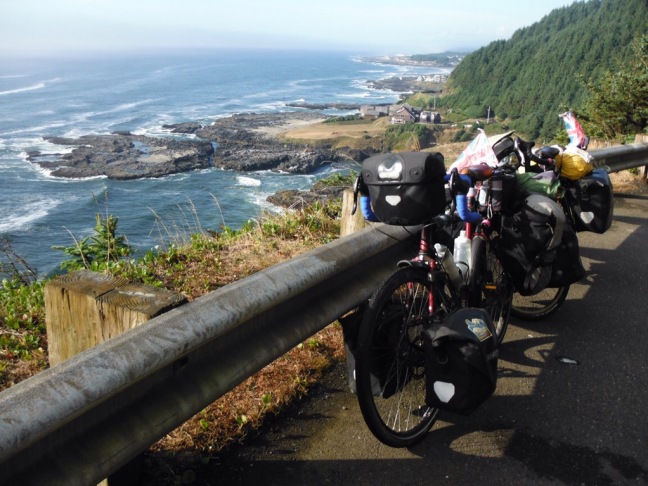 After a week of us and all our kit being soggy – it was impossible to get anything properly dry as even when there’s no rain overnight the air is damp – we decided to detour inland for Labor Day weekend to Eugene, 70 miles from the coast but home of Bill who we met a few times cycling across Montana and Washington and then camped with on the San Juan Islands. The lure of seeing a friendly face, sleeping in a bed, sitting inside on a sofa AND washing and drying everything we currently own outweighed the extra miles. It was well worth it. As well as those benefits noted above, the detour was memorable for a number of reasons:

1. There were no campgrounds on our route inland so for the first time we camped in the woods by the side of the road. Unsurprisingly it rained a lot, and we were also woken by a car driving very close to our tent at 2am. It was not the best nights sleep.

2. We ate the best piece of pie in the whole of the USA. Homemade rhubarb pie at Donna’s Low Pass Cafe, if you are ever passing by on Highway 36 in Oregon, comes highly recommended.

4. We spent most of the Saturday watching football (of the American variety) as it was the first day of the college season. By the end of the day we had watched parts of least five matches, and I had probably learnt at least 25% of the rules.

5. It was finally time for a Changing of the Flags. Our Union Jacks from Boston were looking more tired than we were, which is quite something, so got replaced.

6. Bill cooked us amazing food. Salmon, ribs, waffles for breakfast, you name it…. We ate it. It was very hard to leave.

7. We finally booked our flights out of Los Angeles. Next stop Japan! 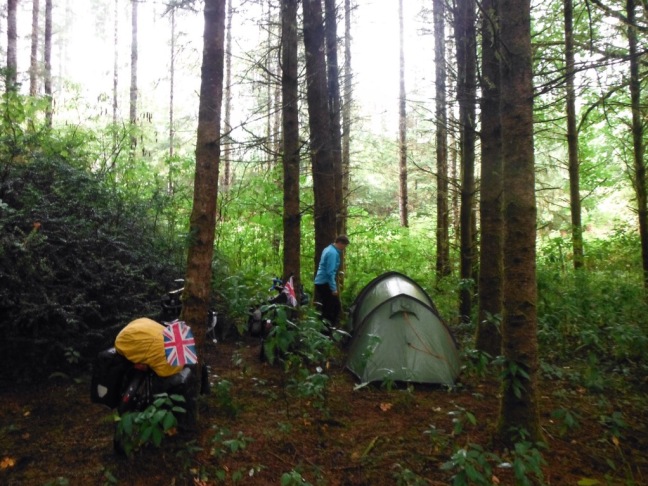 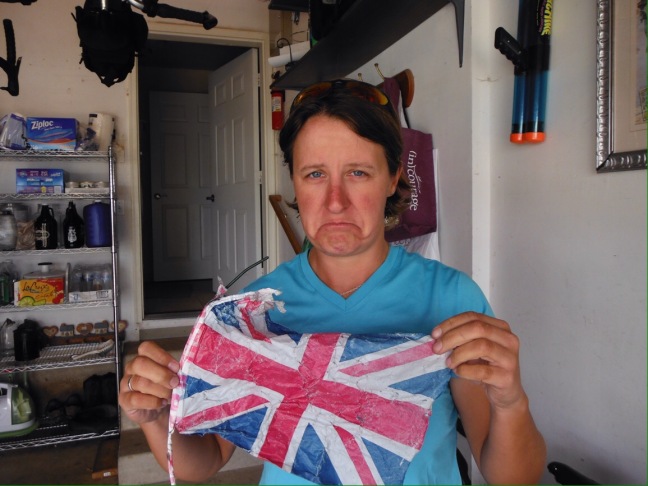 Back on the coast we had another miserable, wet day to Bandon. The highlight was finding a community cafe to dry off in that served a hot lunch with a hot drink for $2 per person. Thankfully we had a host that night so wouldn’t be in the tent, and we kept being told that better weather was coming. Bandon was one of the few appealing towns we rode through on the Oregon coast, and had a nice beachside area and boardwalk. It also had one of the coolest art projects we have seen – a collection of sculptures made using waste washed up on local beaches. Visitors to the gallery can help to make future creations, but unfortunately we didn’t have time to contribute our artistic talent. We also rode past the storage area where waste is kept before being used, and seeing the huge amounts of plastic was very sobering. It was good to see the waste being collected and used but sad to see it existing in such volumes. 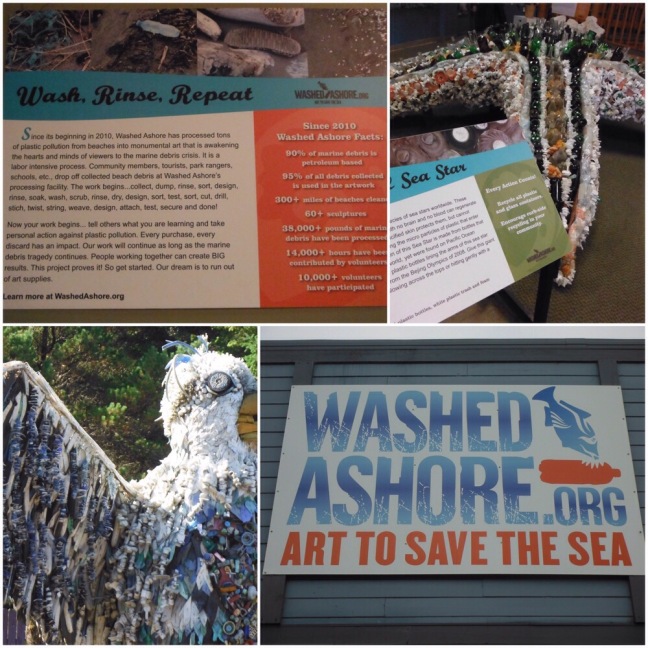 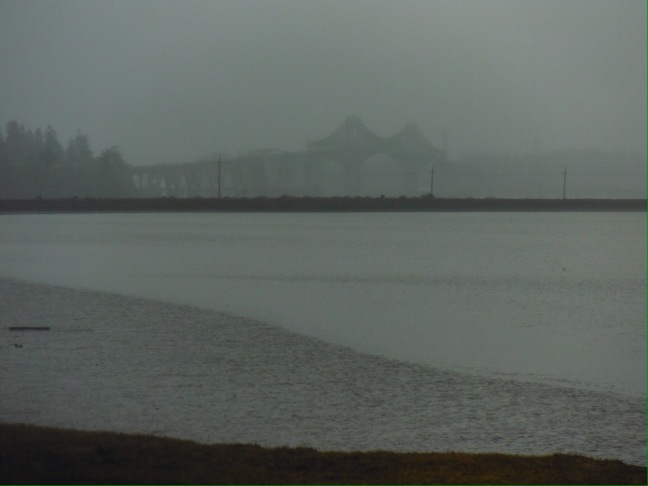 Our last day and a half in Oregon was by far the best riding. The skies cleared just at the right time, as Highway 101 passes through empty, rugged coastline with amazing views of sea stacks, natural arches and coves. Reflecting the bright sunlight, the sea was finally that azure colour that it always seems to be on tourist brochures. We stopped every few miles to sit and watch the crashing waves. The kids were now back at school so the traffic was much lighter. Oregon pretty much redeemed itself in the last 70 or so miles. To add a bit of icing on the cake, on our last night we were down by the marina marvelling at the size of the salmon that had been caught that day. One of the ladies who caught it offered us a piece for dinner – all we had to do was find someone to cook it. As we had already discovered, Americans are not light campers so it wasn’t difficult to find someone with a grill at the campground. Thirty minutes later we were sat eating salmon that had been swimming around in the river just that afternoon. Amazing. Though probably not if you’re vegetarian. 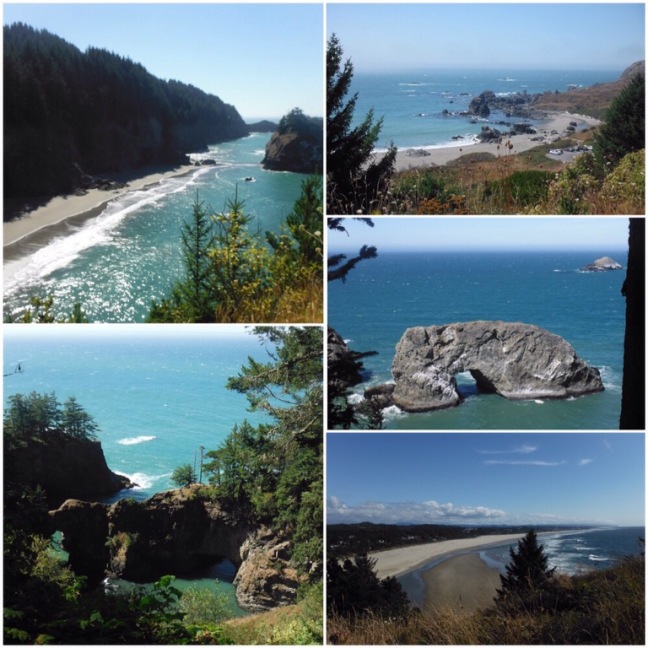 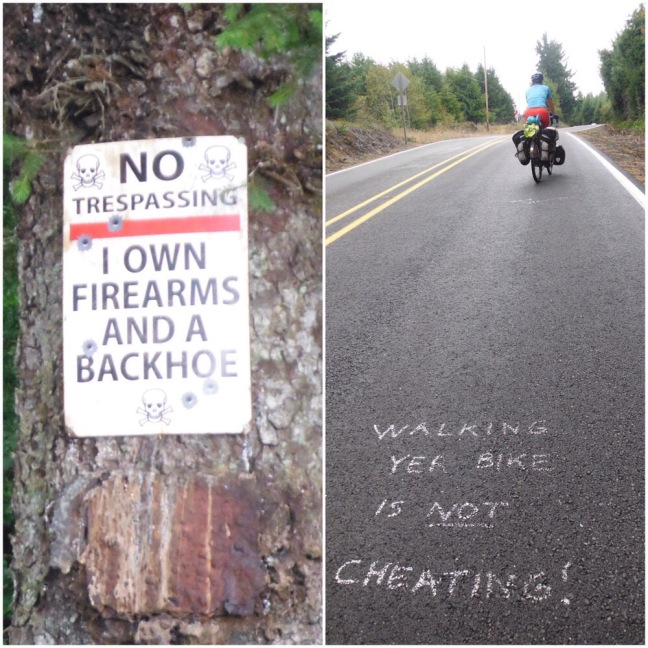 Thanks to Bill; John and Kathy; Suzy and Ed; Andrew and Tracy; and the salmon fishers of Gold Beach.