We arrived in Japan not knowing what to expect, other than that it would be very different from cycling across the USA. It ended up being a country that entertained us in many ways. Japan is a great place to cycle tour for a number of reasons – good food and water is everywhere, camping is easy and hot springs (onsens) are a great way to end a day’s cycling. But one of the best things is that so many small, quirky things made us smile over and over again. Here is just a selection!

We mentioned banana surprises earlier, but this was not the only food surprise. A lot of food was a surprise for us as we had no idea what we were buying a lot of the time, but particular foods even when you thought you knew them could still surprise you. Take the humble hat cake. (No? It’s a Kochi speciality. A cake shaped like a hat). The first one we tried was plain. It was great. Then we bit into our next one to find a sweet bean paste filling. Surprise! Another one of our favourite snacks was a fried potato fritter type thing that had different flavoured fillings. But they all looked the same on the outside so we never knew what our filling might be. Meat, vegetables, curry… surprise! The perfect cyclist snack, onigiri (a rice triangle wrapped in seaweed), has flavoured fillings according to the colour of the label. But we never seemed to get the same one twice. It was always a surprise.

(Note: not all surprises were good. Debs was not impressed to bite into things that appeared to be chocolate only to find nuts. Though in those situations I got two to eat, so it’s not all bad.)

It seemed to us that the vast majority of Japanese men nearing retirement are employed in the construction industry. Mostly in the important task of supervision. Every construction site, however big or small, would have a team of construction supervisors at the entrance making sure there was no confusion over who had right of way and directing traffic and pedestrians with large glow sticks/lights sabres or flags. This role was taken seriously. And for cyclists it is amazing – as soon as they see you coming, you see the oversized glow stick wave and the traffic is held up until you are safely through. Awesome.

We found some instances where there must somehow be a shortage of men nearing retirement so a model construction worker had to be used instead. The level of attention to detail was impressive. We also found model policemen, a model car park attendant and many very realistic scarecrows.

Probably the thing you see most often in Japan, more than convenience stores and shrine gates, is a vending machine. They are everywhere. If you were in a car you would never have to drive for more than five minutes without seeing one, which means on a bike they are pretty regular too. More impressive than their contents were how they were installed, run and refilled in some of the most out of the way places, like the edge of a field. Mostly they have cold drinks, but if you are lucky there will be not one vending machine but a row, with different delights in each. We saw beer, cigarettes, sake (wine), ice cream, noodles. But we were expecting more diversity, and on our penultimate day in Japan vending machines got a whole load more interesting when we saw a lay-by with an egg vending machine and a rice one.

There you are, riding along a quiet road, and from nowhere a tannoy system fires up and starts playing random music. This was nice. Less nice was when riding past crop fields and some kind of animal noise starts playing, presumably to scare away birds (and cyclists). Most entertaining was probably when we were in our tent almost asleep and Auld Lang Syne started playing over the campsite tannoy, and was repeated lullaby-style for fifteen minutes to demonstrate that fun time was over. I’m actually not sure this made us smile at the time, but the extensive tannoy system is a funny part of life in Japan.

As well as the hundreds of jobs available in construction for those skilled with a giant glow stick, there are many other jobs that some people (us) might consider a little pointless. There is obviously leaf-blowing, the most pointless job ever that can be seen across the world, but we had some Japan-specific favourites: someone holding a sign warning that construction is ahead (just put a sign up?); steam cleaning the white line on the side of the road (its Japan, it’s not that dirty anyway); and a strimmer’s mate, someone holding a screen next to a verge strimmer to stop the grass spreading on the pavement (resoundingly unsuccessfully).

Like the loser I am, I find signs in different countries fascinating. It shows how there are innumerable ways of conveying the same type of instructions/warnings. In Japan it is mostly kid cartoon style, even sometimes kids drawings. We wondered if towns had competitions in primary schools to design some signs, particularly those telling you not to drop litter. Quite serious warnings (e.g. be careful not to die from this or that) were portrayed with cartoon animals. Others just made us laugh.

I don’t think we’ve cycled in a country where less English was spoken, so it was strange to see English translations in many places (particularly supermarket departments). But there’s a bit of work to be done on the quality of the English. 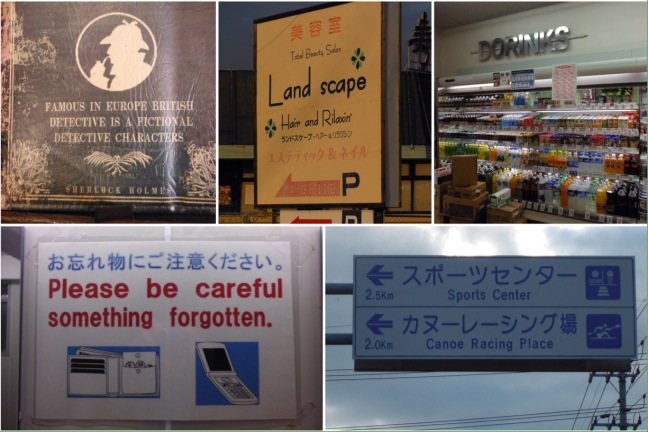 Going to the toilet

Another great feature of Japan for cyclists is that there are public toilets everywhere, and they are the cleanest toilets I have ever seen. But they are more than just toilets. They are shower toilets, with full washing facilities. Also you can use the music button to play a flushing sound, covering any embarrassing noises (sometimes this noise is automatic). Even better, toilets in hostels/hotels have toilet slippers, so you change your regular slippers at the door for plastic toilet slippers. Brilliant. The toilet instructions also never failed to make us smile.

Sushi on a Shinkansen

On our last night in Japan our sushi arrived on a Shinkansen (bullet train). Smiles all round. 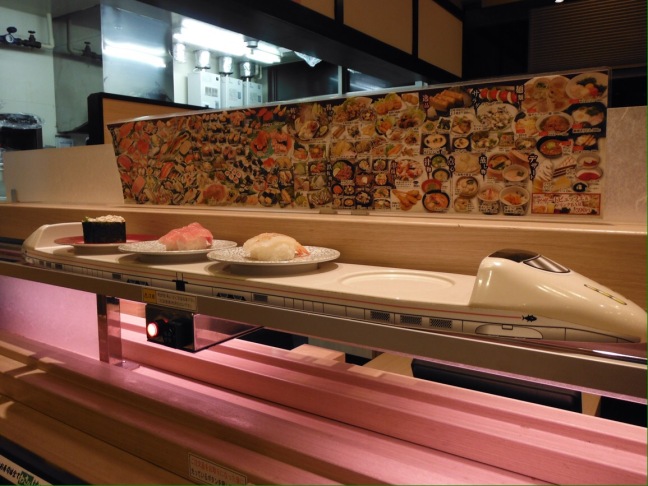 Thanks to Japan for making us smile.

3 thoughts on “Ten things that made us smile in Japan”