Landing in Tokyo was quite the culture shock. The beauty of travelling by bike is that the scenery/culture/people/weather changes gradually as you move across countries or continents, so nothing is ever that big a shock. Sit on a plane for twelve hours however and you can suddenly find yourself somewhere totally different to where you last went to sleep.

I (Jo) usually hate flying, but in fact it was a welcome respite from the stress of getting the boxed bikes and ourselves to the airport and planning how to do the opposite when we landed in Tokyo. 12 hours where I could relax, sit still, and not have to make any decision other than whether to watch Finding Dory first or play Tetris. In fact the first thing we did was watch Bake Off, which we usually like to do with either a cake or if not, an alternative dessert item. As neither of these options were available straight after take off we settled for a Baileys. Rock and roll. Our flight was an hour late landing which meant that the last bus we could catch into the city left fifty minutes from the time we unbuckled our seat belts on the plane. Japan has a reputation for efficiency but surely this is not enough to get disembark, clear immigration, collect our bags, find and collect the boxed bikes, clear customs, find the bus stop, buy the right bus ticket…. but sure enough, 45 minutes after landing we were stood in the bus queue, tickets in hand. This has to be a record. There was even time for a first Japanese toilet bum-washing experience (more on that later). We made it to our hosts and somehow it was Thursday night already. A day had disappeared. 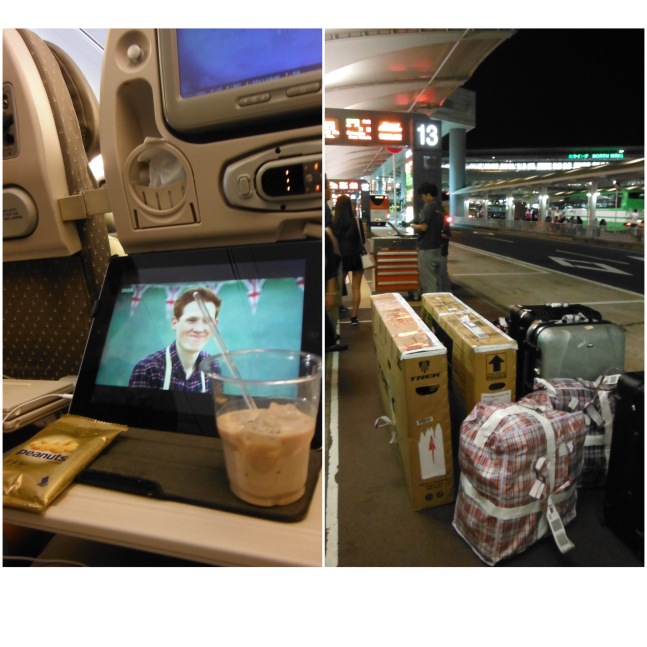 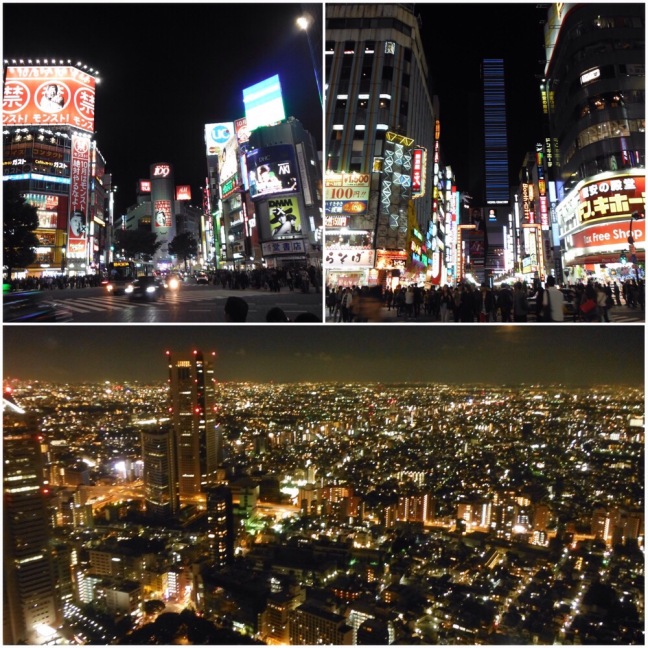 We had five days in Tokyo, and most of these were spent wandering around wondering what on earth was going on. Walking through Shinjuku and Shibuya at night was exactly how Tokyo looked in my head – neon lights, flashing billboards, lots of noise, traffic and people. Yet a couple of subway stops away you can walk through tiny, quiet residential streets and feel a million miles away from the craziness. We went to supermarkets and stared at shelf upon shelf of things that we didn’t have a clue what they were. A bit more transparent packaging would help foreigners try to work out what’s inside. One lunchtime we ordered food from a ticket machine outside a restaurant, took the ticket inside, then two minutes later collected our food. We cycled around gazing at all the symbols on road signs wondering how we were going to navigate our way out of the city. The search for a decent road map in English that wasn’t a million pounds proved fruitless. 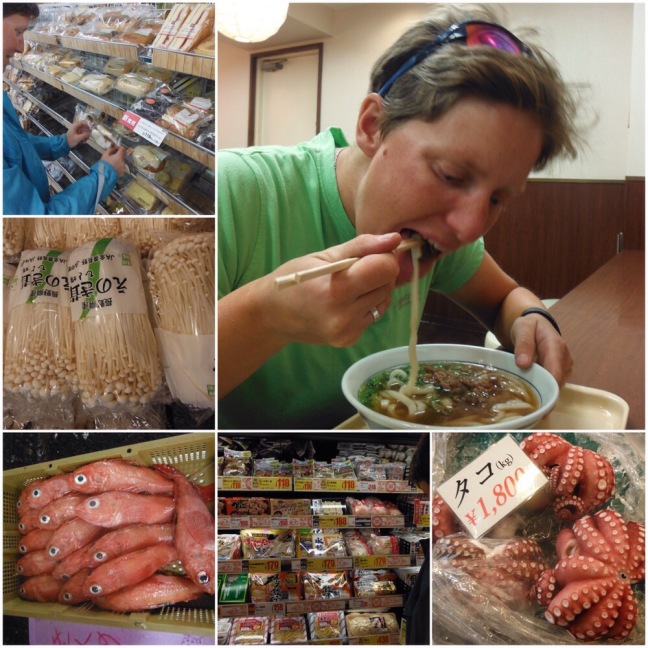 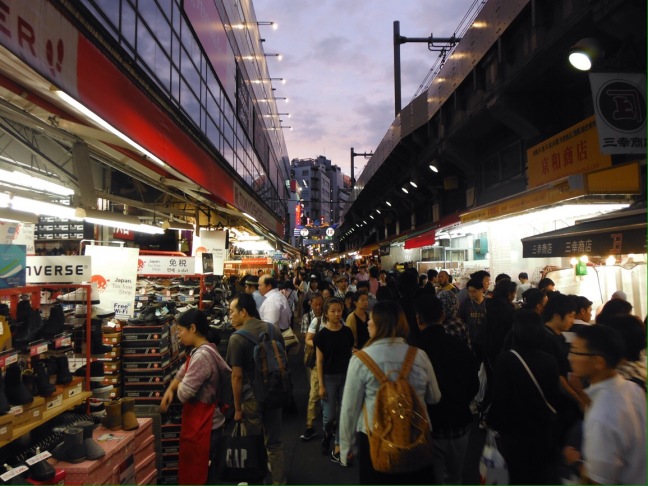 One morning we went to Senso-Ji temple, which was so busy with tourists (almost all Japanese) that there was no sense of peace at all. Wandering round to one of the smaller shrines on the same complex we saw there was a wedding, and the whole family were posing for photos taken by tourists they had never met. Strange, but not as strange as the fact that directly opposite this wedding was a girl and a monkey dressed in exactly the same outfits. On the opposite side of the river was the Asahi building that looks like a beer. A group of people drove past us in go karts wearing Mario Kart outfits. Everywhere you look there is something crazy going on.

Tokyo is a fairly cycling-friendly city. There aren’t so many bike lanes but most pavements (sidewalks to our American friends) are designated shared use, and if they’re not, people cycle on them anyway. In fact we soon noticed that it was only us and the cycle couriers bothering to ride in the road. And wear a helmet. The infrastructure might not quite be there but the culture of cycling reminded us of Northern Europe – people of all ages riding town bikes with baskets in their normal clothes. Mums riding with kids on the front/back, boys in track suits riding to sports practices with their kit bag in their basket. No lycra, no helmets, just functional riding. It’s a fairly densly populated city so weaving in and out of all the pedestrians on the path takes some skill, and doing it one handed whilst carrying an umbrella takes even more. It was all a bit advanced for us so we took our chances with the road traffic. 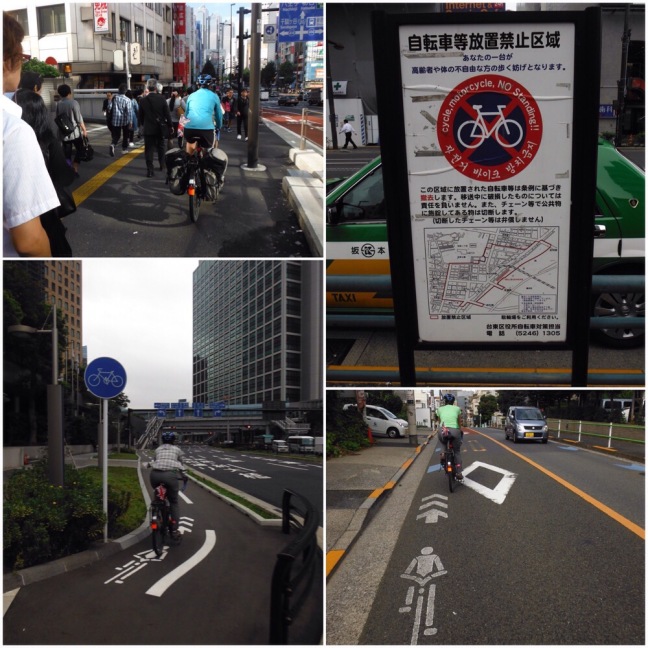 All of this makes Tokyo a good place to explore by bike. Until you actually want to get off. We realised pretty quickly that if you don’t have a stand, your chances of finding somewhere to leave your bike drop dramatically. There’s bicycle parking places everywhere, but they are just that – a space in a car park with a bicycle painted on the floor. No posts. No use to us stand-less foreigners. There’s also certain streets where you are not allowed to leave bikes, and if you do they are likely to be ticketed or removed (we saw both happen). There may or may not be a sign informing you of this. Our first brush with Japanese police was when we visited the famous Tsukiji fish market and tried to park our bikes outside. No! (Despite these teething problems the market was quite the experience. More things we didn’t recognise; men chopping fish with swords; fish heads everywhere). It is fascinating which rules/laws are obeyed to the letter and which are more flexible. Japanese cyclists also don’t seem too worry too much about cycling on the wrong side of the road, or riding through red lights. We are yet to see anyone local cross an empty road whilst the red man is still on though.

A walking tour around Ueno park was a good introduction to Japanese culture. An old guy (the ageing population over here is very obvious) walked us around for a couple of hours and explained a few key things. We learnt the difference between Buddhist temples and Shinto shrines; how Japan has prominent, random statues of people who once visited to dubious benefit of the country; that homeless people who live in the park tidy their possessions up into a cube shape wrapped in tarpaulin during the day and leave them neatly lined up on the path; and that there is a street in the city devoted entirely to producing and selling the frighteningly accurate plastic replica meals you see in restaurant windows. Armed with this information we felt more ready to take on this weird and wonderful country.

Our final day was mostly spent at the British School in Tokyo talking about our trip with primary and then secondary students. This was a lot of fun, and the older students had their own budget to plan a trip at the end of the school year so it was good to answer their questions. Mark increased our knowledge of Japanese law intricacies by informing us that crime is so low that he leaves his iPhone lying around unattended with no trouble but umbrella theft is rife. In between the sessions we rode to Meiji Shrine, struggled to find somewhere to lean our bikes in the bike parking area and were told off for eating a banana outside the park. Later that day Debs picked up a green basket at the supermarket from near the checkout only to have it swiftly snatched from her and replaced with a red one. We still had a lot to learn.

Thanks to Richard and family; Mark and everyone at BST.