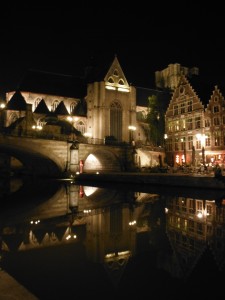 As you may have noticed on Track my Tour, we did not take an obvious route towards the Alps from the ferry. This is because Jo really wanted to visit Bruges. Colin Farrell was not there, but Belgium’s cities delivered in all other aspects. At least once everyday we saw fancy buildings, rode on cobbles, and consumed either beer, chocolate or waffles. Occasionally we managed all three. From Bruges we rode along a canal path to Ghent which has even more fancypants buildings. It looked especially impressive on a sunny Saturday afternoon, and one of the fine squares provided a great venue for an evening out eating Belgian (great marketing coup France) fries with meat and beer sauce.

The route to Brussels was less scenic but also less cobbled. Swings and roundabouts. We very much enjoyed being tourists for the day and learning about Brussels and Belgium. Still not clear on why there is a statue of a peeing child, but I was surprised to discover that Belgium did not exist until about 1830. On it’s creation, a King was needed, and the chap that was recruited also had an offer from Greece to be their King. Nuts. Leopold picked chocolate and beer over sunshine and sand, opting for greater wealth and economic stability. Later his son, (Leopold II) decided Brussels needed to be more fancy so built a lot of new buildings in various old stylings. So much of the stuff in Brussels isn’t as old as it looks, or looks more modern than it is, and Brussels is a kerfuffle of the very new and the not-so-new trying to look even older. Leopold II is also immortalised in the strangest Royal monument I have yet seen, virtually naked and surrounded by many women. Bizarre.

The current royal family have little power, and when a law is needed that they may not approve of, parliament simply disbands them for a day, passes the law, and then reinstates them. This happened as recently as the 1990s. There is still a royal palace for living and one for working. I like to imagine the royals pottering between the two as needs arise, probably on very upright bikes with clipboards as map holders. So far Belgium had been an excellent destination, great beer, crazy history, chips, sunshine…

Thanks in this post to Matthieu, Anne-Lise and the not-so-small one, and Use It Travel Brussels.

When even the rocks are pained at how cold the wind is on the beach. . . #rockart #beachphotography #getoutside #osmapping #redjanuary #beachwalks #norfolk #cleynextthesea #norfolkbroads #adventureweekends #microadventures #getoutsidemore #winterweekends #wintersunshine
Very pleased to have had a full weekend of ☀️ in January! Drove to the North Norfolk coastline and walked the wide beaches. Stunning area of the country and well worth a visit. . . #greatbritishoutdoors #getoutside #osmapping #exploremore #exploreyourbackard #outsideeveryday #redjanuary #norfolk #northnorfolk #holkham #holkhambeach #brancasterbeach #northnorfolkaonb #weekendinwells #adventureweekends #microadventure #wintersunshine
Saw the James Bond trailer last week. Thought “that looks like Matera”. It is. Matera is the greatest city you’ve never heard of. Or maybe you have now, as it’s the European Capital of Culture 2019. . . We arrived there on our bikes in December four years ago, even though it was back the way we had come from. Our hosts the previous night had told us we had to go there. So on leaving their house we turned back the way we came and pedalled into Matera on the weekend of the world’s largest nativity. Who measures it I don’t know, but street corners and cave houses and church entrances were turned into nativity scenes across the whole of the old town. With laser lights cutting across the valley. The next day we were shown around and marvelled at what seemed to be a real life film set. Turns out it’s Bond appropriate. . . #cycletouring #cyclingeurope #cycleeurope #matera #visitmatera #matera2019 #materanativity #materaitaly #jamesbond #jamesbond007 #jamesbondlocation #jamesbondfilm #jamesbondmovie #notimetodie #notimetodietrailer #notimetodie2020
Nice morning ride to and along the east shore of #rutlandwater (if you ignore the freezing toes and gale force winds). . . #GetOutside #osmaps #osmapping #wintercycling #allyearcycling #yearroundcycling #thickglovesneeded #rutlandwater #rutland #visitrutland #normanton #normantononsoar #exploremore #greatbritishcountryside #
Follow Brakes and Cakes on WordPress.com