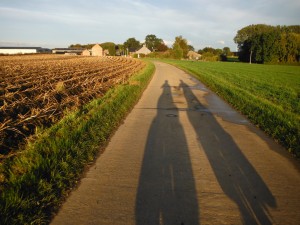 There were many revelations about Belgium in Brussels. As we rode south other misconceptions were addressed. The southern half of Belgium is definitely not to be grouped with the Dutch lowlands. There were some steep climbs, especially later in the Ardennes region. It is not always sunny here, sometimes it rains rain, sometimes it rains leaves. We also learned that even if there are lots of campsites on a map, and you chat to several locals about the location of these, they may not exist or could be very well hidden. Our first stop was Namur, notable for having a statue of a golden turtle and an international film festival. This meant there was red carpets out around town and also that we were accosted by two photographers and other staff for a photocall as we rode past the event. It is possible we were on The Today Show on Belgian TV. This is not our first cycling media event, we were snapped for the Winnipeg Metro in 2012. No idea whether we made the newspaper though. 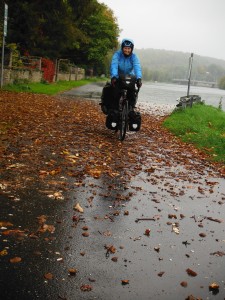 From Namur we headed along the Meuse to Dinant, where brightly covered Saxophones decorated the town. Belgium is responsible for the Saxophone as well as the skinny chip. We climbed out of town and into the hills past several invisible campsites and some that were just closed. It got completely dark and having been told, “there is one in the next village, 6 or 7km” several times we decided to stop riding. There are so many kind people in the world, and the Belgian family whose evening we disturbed by knocking on their door wearing reflective vests welcomed us to our best campsite yet in their back garden (with full size football goal – one of the girls is an excellent player). Also a opportunity for us to test out rusty French and drink chocolate chaud in their kitchen. Passable at best! (Our French, not the hot chocolate).

The roads got hillier still, even as we followed the river Ourthe. The surroundings were very pretty and even better there was hardly any cobbles. We had a great stay in an old farmhouse and enjoyed hearing about container ships and tinyhouses. Luxembourg next!

Thanks in this post to the family Debaty of Heure, Luc, David and Pierre.